Things to do in Benitses

The old village has a traditional feel to it, and is surrounded by woodland.

Walking up the old streets one has the feeling that you are in a mountain village in Greece, except that here the sea is near.

The coastal road contains hotels which are suitable for the best and cheap holidays that someone can get, restaurants, cafes and other shops that offer everything that the most demanding visitor can ask.

Benitses is surrounded by mountains on one side and by the aquamarine waters of the Ionian Sea on the other.

Add to this unique combination of nature the natural hospitality of the residents, who are familiar with different cultures, these are what makes visitors love the village. Starting from the village there are many trails on the slopes of the mountain that can be crossed on foot or by bicycle.
These paths are hidden in the lush vegetation and lead to the villages of Gastouri, Stavros and Agioi Deka, and some trails go to the water sources with their aqueduct.

By these paths there are many small churches scattered on the slopes of the mountain, such as Agia Paraskevi, Agia Triada, Agios Nikolaos Vrysiliotis, Taksiarches, Evaggelistria and others.
The effort in walking up to Stavros or Agioi Deka will reward you with superb views over Benitses.

A visit to the sea museum is a must.
It is owned by a former diver and has a huge collection of shells, fossils, sponges, corals, and stuffed large fish, one of the largest collections of its kind in the Mediterranean.

A visit to the Achilleion palace in Corfu 3 kms. from Benitses at the start of the village of Gastouri is the Achilleion palace, a three storey building that was built in 1890 by the Austro-Hungarian Empress Elisabeth also known as Sissy.

The architecture of the building is a combination of the Doric and Ionic styles, with many statues of ancient gods, philosophers and personalities of the classical era, but above all it is dominated by the statues of the mythical god Achilles, who gave it its name.

After the death of Elizabeth the Palace was bought by Kaiser Wilhelm of Germany who used it as a summer residence.
During the First World War it became a military hospital.

As tourism grew it became a casino, but today it is a museum, and a favourite excursion destination for many visitors, we hope that you will join them.

The sandy beaches of the West Coast

If you plan to rent a car, or you have your own , it makes it easy to explore the vast sandy beaches of the west and southern coast.

Daily Cruises to the Greek mainland 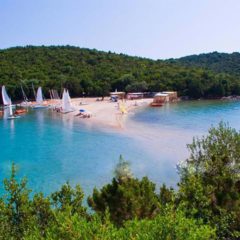 Every day there are small boats from Benitses harbour offering day cruises to the mainland town of Parga and the village of Sivota (Mourtos), also to other parts of Corfu, and to the island of Paxos.

Mourtos (the ancient Sivota) is an area of unsurpassed beauty, and unspoilt beaches, with numerous small islands which contain many strange large caves with hundreds of wild pigeons.

The boats can go into the caves where the water is incredibly clear so that the bottom can be seen despite the depth which can exceed 20 metres, during the trip you can swim between the islands, imagine how it feels to swim between 3-4 and five small islands .

Paxos and its neighbouring island of Anti-Paxos also gives you the opportunity to explore our nearest, but very different, neighbours.

During your Benitses vacations you should not miss the opportunity to enjoy such a trip, you can book the trip through your hotel but also if you go to the harbour at 9am you can join the boat on your own.

Also at the harbor entrance, during the afternoon there are ticket for cruises both for the south of the island, for Paxos and across the mainland coast at Parga as well as to the north and some places of Albania.

July 15th to August 23rd is the season for most special events and festivals, if you get your holidays this time of the year you will have the opportunity to participate in some of the Corfu traditions and customs which become louder and longer each year.

Some of these are: the feast of St. John the Lampatari on June 22 in Benitses, a feast when people jump over fires.
Then on August 6th is the feast of Our Saviour and is celebrated on the famous Mouse Island.

But the largest feast of all is on July 16th and 17th, the festival of Aghia Marina in Benitses.

The Cultural Association of Benitses organizes, supervises and takes responsibility for this event.
The folklore group of Benitses presents Corfu dances wearing traditional costumes, the Association of Women in Benitses offers traditional food, sweets and local products, a folk orchestra plays until the early morning, and there are also dozens of vendors selling toys, souvenirs, paintings, and so on.
Because there can be no celebration without eating and drinking all kinds of dishes and especially kebabs and lamb on the spit are available in plentiful supply.

In Benitses there are restaurants with great diversity, some offering traditional Greek and Corfiot cooking, but also Chinese cuisine, grills with meat or fresh fish, pizza and many others.
The 400 years of Venetian rule have strongly influenced Corfiot cuisine which is a mixture of Greek and Italian with a strong emphasis on fish and seafood in general.

Your holidays in Benitses is an opportunity for you to try some of the most famous local dishes such as:

– Sofrito: is thin strips of veal lightly sauteed in a pan with a white sauce of garlic, parsley, white pepper, white wine, salt and vinegar. Served with rice or mashed potatoes.

– Pastitsada: is the most famous Corfiot dish, cooked beef with garlic, parsley, salt and pepper, the sauce contains olive oil tomato, onion, cinnamon, cloves garlic, salt, pepper and nutmeg, is always accompanied by pasta.
The Pastitsada in villages is made with cockerel, but Pastitsada can also be done with fish.
Pastitsada made with cockerel is the local favourite.
Everyone has their own unique variations of this recipe.

– Bourdeto: boiled fish, Scorpionfish are the best, but other fish such as bass can also be sued.
They are cooked with chili pepper, chopped onions and lemon at the end, in the traditional Bourdeto we never use tomato sauce.
Bourdeto is very tasty with octopus too, it is made with more onions and chopped potatoes boiled together.

Before going home you must remember to buy the traditional Nougat called Mandolato and candied kumquats, you can get these in any supermarket, but also in the traditional cake shops.

Some restaurants worth trying are:

Restaurants LAOPETRA ,  in the main street facing the harbor

For Coffee, ice cream or drink

There are dozens of bars and cafes in Benitses where you can enjoy coffee, ice cream or a drink.
Those in the centre of the village are also popular meeting places for the local resident.

Laying on the beach

If you do not want to do any of the above you can just laze on one of the pristine blue flag beaches, where you will find sun loungers and umbrellas.
There are water sports like water skiing, parachuting, jet skiing, windsurfing, pedaloes and motorboats.
Boats can be hired for sailing and there is an opportunity for diving a little further away.

In Benitses harbour you can ask for information or hire a boat through your hotel.
On the beach next to the harbor there is a lifeguard.
Here is the beach at Benitses Κontrakia area at early morning… Lately, nightlife has become low profile, comparing to the notorious 80s it is very different and quiter but still pleasant though, with many small bars and some night clubs which can become very lively at times… but the problem is that the kind of tourists who visit Benitses cannot maintain a lively nightlife.